When you are new to the world of smart homes and home automation, controlling your smart home through your smartphone seems super cool.

But once the novelty wears off, you might start missing the simplicity of physical switches. Or you may want to change home alarm modes or run scenes with just a single touch of a button, instead of pulling out your smartphone each time.

After all, a smart home is all about convenience and improving your quality of life.

That’s where the Aeotec Wallmote Quad comes in.

Aeotec used to belong to Aeon Labs, the company founded in 2006 and based out of Silicon Valley. But that’s no longer the case. Aeotec also have another brand that’s popular in the smart home market – Popp. They also are an OEM for Oomi.

The Aeotec Wallmote Quad is comes in a blue and grey box. As always with Aeotec, the box is no larger than it needs to be and avoids needless plastics and packaging. The front of the box just hsows the Wallmote itself and the rear highlights Z-Wave Gen 5 compatibility and the Z-Wave Plus chipset used. The model number is also mentioned – I got the ZW130-C which is the 868.42 MHz version.

The Wallmote Quad measures just 7.7cm wide and 1.9cm deep (3.0 x 0.4 inches). The front face of the Wallmote Quad is divided into 4 squares, each representing a button area. An RGB LED separates the four buttons and indicates a successful press along with haptic feedback and a beep sound.

The four button areas are capacitive, they do not depress and do not need pressure to activate.

The bottom of the Wallmote has a speaker grill.

The rear of the Wallmote has the Action button, and the micro-USB port for charging the built-in battery. 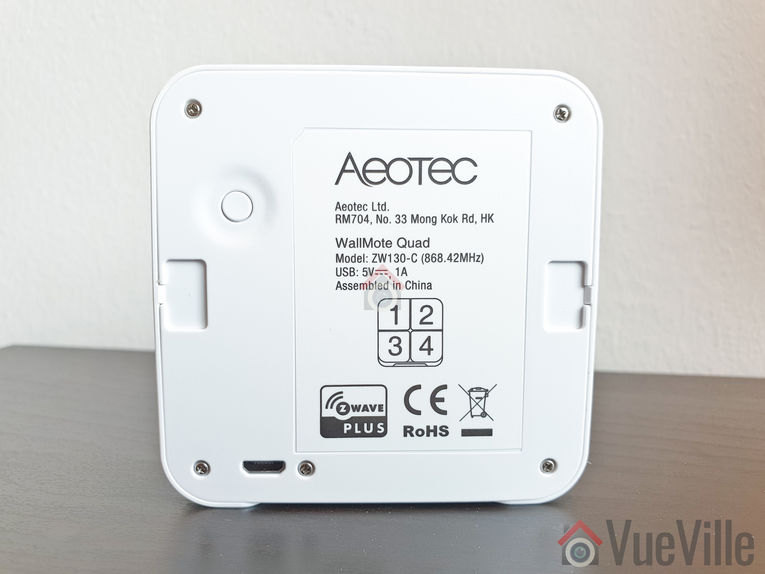 The WallMote Quad supports Over The Air (OTA) feature for firmware upgrades. You will need an Aeotec Z-Stick USB controller to use this feature.

My Z-Wave controller software, HomeSeer HS3 supports the Wallmote Quad. Samsung SmartThings doesn’t officially support this remote, but you can make it work by setting up a device handler in the SmartThings IDE.

How to use the Wallmote Quad

The Wallmote Quad can be used to control Z-Wave devices or activate scenes by touching, long pressing or sliding any of the four button areas.

If the battery is low, it will just blink orange. Plug in Wallmote with the USB cable and it will glow solid orange indicating that the battery is being charged.

You can either install the Wallmote in the wall and keep it permanently powered over USB or use it as a portable remote control. This is possible thanks to the 640mAh built-in rechargeable battery.

My experience over 2 months of daily use

I tested the Wallmote Quad with an Aeotec Z-Stick Gen5 to control my Aeotec LED Bulb 6, and an Aeotec Doorbell 6.

The Wallmote was quite responsive and never missed any button presses. By this I mean that whenever the Wallmote beeped and lit up and vibrated to indicate a succesfu button press, HS3 always received the command. The delay between a successful button press and a command being executed, such as turning on a light, was instantaneous.

I used the single press and long press functions. I did not try the sliding gestures, as I don’t see myself using it that way. But if you want to use gestures to simulate a lamp dimmer or fan speed control, you can.

If there’s one quibble I have with the Wallmote, it is this: if you are using it as a portable remote control device, its difficult to say which way is up just by looking at it. There is a slight recess on the lower side where the speaker grill is, so you either have to feel it out or look at the back to figure out which way is up. A solution exists though – use a marker to write on the buttons. I would rather not do this because the device is so pretty.

My current home is of solid concrete construction and so Z-Wave signals do struggle in general. The mesh network design of Z-Wave networks is how my whole home is reachable with just one Aeotec Z-Stick. Every powered Z-Wave device acts as a repeater.

So I was able to use the Aeotec Wallmote Quad throughout my home without any issues.

I charge the wallmote once in 2 weeks on average. This is with light-medium usage (especially as my kids love turning certain scenes on and off).

A premium-looking Z-Wave remote control that can do anything your Z-Wave controller can.

Buy the Aeotec Wallmote Quad from your local Amazon store.

I am passionate about making it easy to get into DIY smart homes and security cameras!

Hi there! I am Daniel and thanks for stopping by VueVille – where I document my DIY smart home journey. Follow along for hands-on reviews, buying advice, how-to guides and the occasional rant.

How to Block IP Cameras from Accessing the Internet

How to Make an Arduino Air Quality Sensor

Use the Fastest Browser that Doesn’t Track You
Blocks ads. Blocks trackers. Keeps your data private. Open source. Up to 8x faster than Chrome and Safari. Download now for free.
About this blog